I’m not a pro athlete. I’m a bike commuter. And still, I love seeing my stats! Even though I could guess with a high accuracy how much I ride each month, reading those numbers on the screen of my bike computer gives me satisfaction.

If you’re a casual cyclist, a commuter or an enthusiast like me, and you don’t need many fancy advanced options in a bike computer, you’ve come to the right place.

If you are looking for the cheapest bike computer ever produced, please STOP READING and go to Aliexpress to buy the cheapest junk you can find. Just make sure you buy 3 or 4 of them because you get what you pay for. However, there are some really interesting options in the 30-100 dollar price range. If you are looking for affordable bike computer options that will serve you for years to come, this is the article for you.

Originally I used a bike computer from Decathlon’s own brand, and when it stopped working I upgraded to the Bryton Rider (you can check it out on Amazon here), which I consider an underrated hidden gem in the world of fancy and expensive GPS computers.

But let’s not get ahead of ourselves, because it may not be the best one for you.

In order to avoid paralyzing you with an abundance of options, I’m going to give you four specific budget conscious recommendations to keep track of your miles and basic stats, but first let’s learn a little bit about them so you can make a well-informed decision and get the best value for your money for your needs.

GPS vs sensor based

The biggest dividing line among bike computers is whether they measure your speed and distance based on GPS data or data collected from your bicycle wheel.

GPS technology has become very affordable in recent years, so some of them are very strong contenders in what may be the best bike computer for you. Some GPS computers come with basic features such as recording data, while others are equipped with more advanced ones, such as navigation, training plans etc. Usually the more you pay the more features you get.

All GPS bike computers collect data from satellites, which has several advantages.

GPS bike computers are not without disadvantages, however. Here are some points where they fall behind traditional bike mounted sensor counterparts:

Sensor based computers, on the other hand, collect data from the sensor mounted on the fork and the spoke. Since we know exactly how much distance the bike moves forward with each wheel revolution, it’s easy to calculate the speed and the distance from the data received.

Some sensors transmit the signal to the main unit through a wire, while others wirelessly. Having a wire means a visible wire running on the fork to the computer, but in return it’s a more reliable way of transmitting the impulse, and the sensor doesn’t require a battery. A wireless sensor is neater, but it runs with a battery, which means two batteries in the system (one in the computer and another one in the sensor).

There are some awesome benefits of sensor based bike computers that makes them appealing:

There are some reasons why you may consider that a sensor based bike computer is not the best option for you:

Let’s dive into the world of the best budget bicycle computers you can buy.

Cat Eye is known for producing quality cycling accessories that are outstanding in value. The Velo 7 is one of their entry level cycle computers, which you can find on Amazon.

This bike computer is reliable and easy to operate. The long battery life means that it's always ready to go. 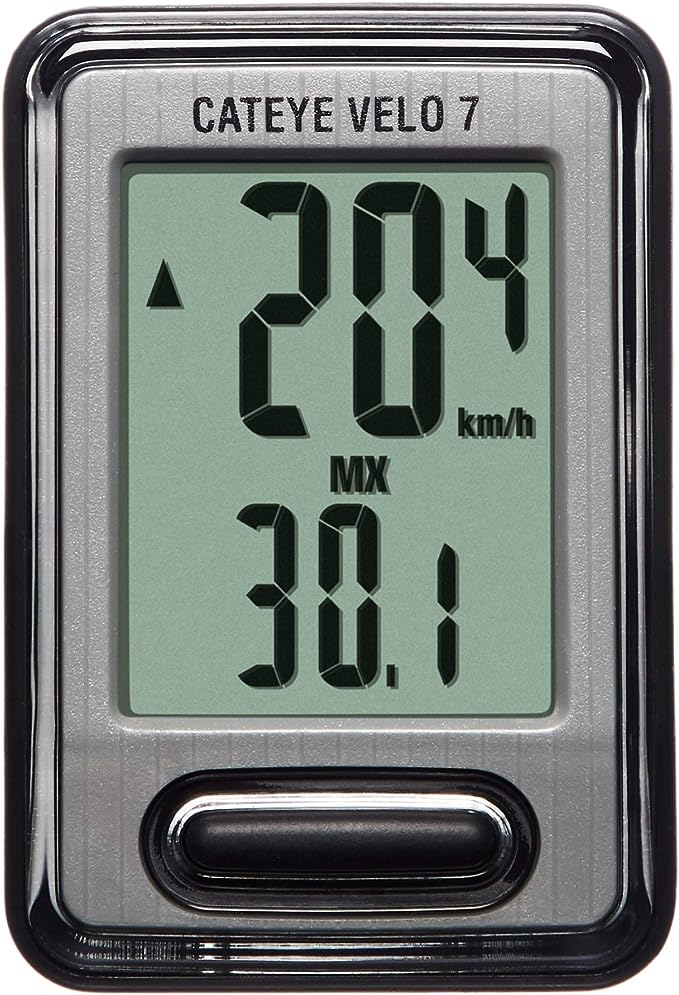 If you want to own the simplest, easy to read, reliable wired bicycle computer, look no further. The only skill required here is that of installing the sensor with a cable tie to the fork and the magnet to one of the spokes, and you’re off. A single button operation makes this device SUPER easy to operate.

This computer does only a few things, but it does them well. It displays your current speed, average speed, max speed, total distance, trip distance, elapsed time. It has also an up and down arrow, which indicate if your current riding speed is higher or lower than your average speed, which they call pace arrow.

Since the entire system operates on a single battery, which can run up to 3 years if you use it for an hour each day, this is truly the most hassle and maintenance free option you can find.

The CAT EYE Padrone is a wireless bike computer with an easy-to-read display with a long battery life. 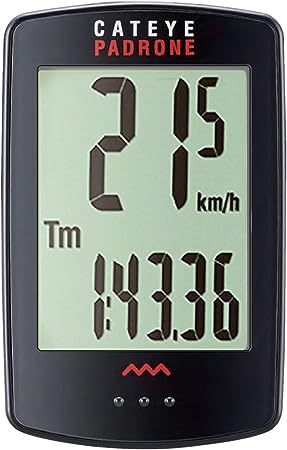 ATTENTION CABLE-FOBES! If you feel like a cable on your fork is going to ruin the aesthetics of your bike or you’re just concerned that it may get caught in something while you’re riding, the CAT EYE  Padrone may just be what you’re looking for.

This cycle computer is just as simple to use as its previously presented little brother. In fact, it is even simpler because instead of having a single button to scroll through the different menus the base of the screen acts as one giant button which is touch sensitive. Just touch the bottom chin of the screen anywhere to jump to the next menu.

By the way, speaking of the screen, this screen is BIG and easy to read: nearly twice the size of the Velo 7.

Not having a button on top of the device also means superior waterproofing. You can ride this in hail, rain or storm without worrying that water will seep through. It’s among the more durable bike computers available.

You get all the same basic functions you get with its wired little brother (rent speed, average speed, max speed, total distance, trip distance, elapsed time, pace arrow), plus additionally you also get a stopwatch.

The only downside of this setup is that it requires two batteries to operate, and need replacing every year if you’re a regular rider.

Easy-to-Use GPS Running Watch that displays your incoming calls and monitors your activity throughout the day. 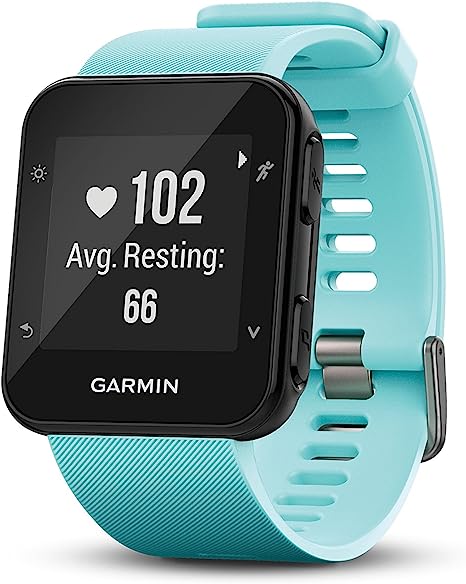 Technically speaking this is not a cycle computer, but it is one of the most affordable GPS watches that has a dedicated cycling mode.

Wearing your bike computer on your wrist has the benefit of not having to worry about whether or not you should leave it on your bike when you park it. Also, since you don’t mount it and put it on again, you avoid the possibility of dropping it. I’m pretty happy that my bike computer still works, since I have dropped three times within the first month of buying it. If you’re as clumsy as I am, you will appreciate this feature.

Garmin built a solid unit here, which keeps track of all your riding stats, such as distance, speed, average speed, etc, and it also has a built in heart-rate monitor, which is an added bonus. It also has the capacity to connect to your smartphone, if you so desire, and gives you notification.

This is a solid option for those who also want to track their running miles as well as cycling stats all in one device. It also acts as an activity tracker.

The Bryton Rider is a simple to use bike computer with a GPS unit. It allows you to connect a cadence sensor as well as a heart rate sensor. 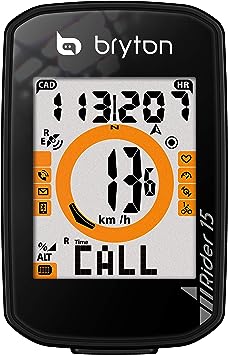 If you’re only interested in your cycling stats, you should seriously consider the Bryton Rider 15. I have personally used this for some time now, and I think this is a remarkably simple, but very good option.

Besides all the standard basic features you can expect in a GPS bike computer, it also boasts some additional features, including the possibility of connecting a cadence sensor, a heart rate monitor, it has a built in thermometer and compass. It displays your calories as well as the total ascent and descent of your ride.

Two features I really love about this computer are the large, easy to read screen, which lights up in the dark and the long, 16 hour battery life. This battery life falls short of the sensor based units, but it is truly outstanding among GPS computers, especially considering the compact size.

The Rider 15 is compact enough to fit in your pocket, yet tough enough to withstand all kinds of severe weathers and even the occasional dropping (I’ve tested this without even wanting).

It has a simple operation with three buttons, and it connects to your smartphone to download the data.

Acquiring a GPS signal upon startup is fast enough: it takes about 10-30 seconds.

Wanting to keep track of your miles means that you care about the amount of physical activity you do. A bike computer can be a great companion in this, because it can inspire you to go further and faster.

Hopefully you can find something that fits your budget and needs.

link to How Hot Is Too Hot To Ride Your Bicycle? & 9 Cooling Hacks

In the Spring and Summer bicycles come out of the sheds, get dusted off, and bring smiles to their owners’ faces. But at the peak of Summer, the nice warm Spring temperature can turn hot, and you...

Continue Reading
link to How to Buy a Used Brompton? - 11 Tips to Avoid a Scam

If you're looking for a Brompton, then you'll already know how expensive these bikes can be. Not everybody has the money to buy a Brompton brand new because it can be pricey. One way of fixing this...